The offices of B-Lann Equipment are now open for all of your fire safety needs. Employees are practicing safe social distancing, wearing face masks, and frequently touched surfaces are being disinfected daily. Please call 518-274-7888 to make appointments or if you have any questions. Stay safe.

Founded in 1947, B-Lann Equipment is a distributor of personal protective, industrial, fire fighting, and fire suppression equipment. We are a well-known service facility specializing in fire equipment servicing, and DOT approved hydro-testing. With fast, efficient, and highly motivated employees, we can get your inspections, testing and service done quickly. B-Lann is also an authorized distributor for some of the largest and most respected manufacturers including 3M and Honeywell. We offer fast service at competitive pricing.

B-Lann Equipment can make sure that you find the best products on the market that fit your needs and your budget. We offer 24 hour service and can meet your schedule. Call 518-274-7888 or email info@blannequipment.com today to see how we can help keep your business and employees safe.

Why Use Ultrasonic Examination Testing (UE)? 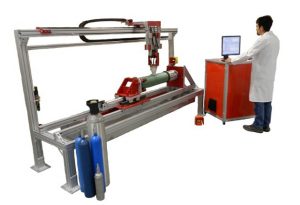 Many industries use compressed gas cylinders to store substances such as oxygen, propane, acetylene, or fire suppressants. Structure flaws in a cylinder can turn dangerous resulting in leaks, ruptures, or even deadly explosions. How can this be avoided?

Hire trusted and trained professionals to use ultrasonic examination testing for your cylinders.

What is Ultrasonic Examination Testing?

UE testing uses ultrasonic waves as a non-destructive process that uses bursts of ultrasonic energy into the cylinder to detect flaws. A defect such as an internal or external crack or thinning wall would be detected by reflecting the sound wave to the detector and displaying what the flaw is on the display.

From there, a specialized technician can interpret the display and recognize the exact dimension, location, and anomalies of any defects and potential future hazards.

Ultrasonic examination testing is the preferred option of cylinder testing and is recognized by the United States Department of Transportation (U.S. DOT), the Compressed Gas Association (CGA), and referenced in many publications of the International Organization for Standardization (ISO).

The processes of the two testing systems are vastly different in technique, time, and cost.

When a cylinder is hydrostatically tested, the cylinder is emptied of its contents, de-valved, cleaned, filled with water, allowed to reach the specified temperature, and submerged into a test tank.

The cylinder is tested by raising the inside pressure to a specified level and held for 90 seconds before it’s released. The walls of the cylinder then relax and return to the pre-tested condition. The amount of water displaced by the expanding cylinder during pressurization is measured against the displaced water’s zero reference.

A cylinder will pass the hydrotest if the permanent expansion does not exceed 5% for wrapped cylinders and 10% for all other cylinders. This is determined by measuring the volume of water that entered and comparing that with the amount of water that was released. This process takes approximately 30 minutes to complete.

The ultrasonic examination testing system consists of sensors that send and receive signals along longitudinal waves and shear waves.

Longitudinal waves are directed straight down at a 90-degree angle. These waves can detect defects that are angled perpendicular to the wave and measure flaws in the wall thickness.

Shear waves enter the cylinder at a 45-degree angle. These waves can locate and identify cracks in the material from any direction. The sensor does not have to be directly over the defect to find it due to the refraction of the shear waves. By using UE testing, a technician can successfully find flaws that are missed during hydrostatic testing.

A UE system provides detailed information about the cylinder that includes wall thickness and relevant defect information that was detected. One of the main benefits of UE testing is the prevention of moisture and other contaminants into the cylinder during testing since the cylinder does not need to be emptied.

There are many advantages to using UE testing for cylinders compared to hydrostatic testing as it is a useful and versatile non-destructive testing technique. Some benefits include:

At B-Lann Equipment, we have a UE machine dedicated to fast and efficient cylinder testing. We are certified by the manufacturer to perform ultrasonic examination testing on compressed gas cylinders and our highly trained and qualified technicians have the experience to detect even minor issues with cylinders.

We offer cylinder testing for:

We will work diligently to ensure that your cylinders are code-compliant, performing properly, and safe.

At B-Lann Equipment, we specialize in all things safety – including cylinder testing and maintenance, fire extinguisher services, fire suppression systems, fit testing, and gas detection. Since 1947 we have been serving the Capital District including Albany, Troy, Schenectady, and beyond.

Call us at (518) 274-7888 or contact us online to schedule an ultrasonic examination test for your cylinders today.